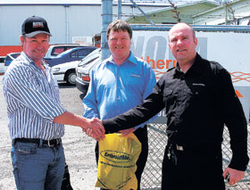 KEEPING a promise can be difficult sometimes, but more often than not the resulting good fortune is well worth fulfilling the pledge.

When Wayne Strong took the reins of EmbroidMe in East Tamaki in late 2007, he promised to reward the person who spent the one-millionth dollar with him – and he couldn’t back out of the deal.

However, he didn’t expect it to come around quite so fast and within two years the golden figure was met. “We appreciate the business of all our customers, but there could only be one who spent the millionth dollar, and it happened to be Nova Therm,” says Mr Strong.

Nova Therm, a manufacturing company also based in East Tamaki, was the lucky recipient of a hamper plus more than $500 worth of caps.

EmbroidMe had just completed a substantial clothing order for the team at Nova Therm, and an order for company caps had been considered for the new year.

Despite the challenging trading environment over the past 18 months, the EmbroidMe group has successfully expanded, with eight stores across New Zealand.

EmbroidMe has gone from strength to strength this year, despite the economic doom and gloom. “Turnover is actually up 19 per cent year-to-date compared to the previous year at the end of November, which is not bad for a recession,” says Mr Strong.

He does not deny that trading conditions have been tough for some companies.

However, it seems that making businesses more visible to customers during tough times is something that a lot of companies have taken up with enthusiasm.

“We have even had some businesses that have been around for many years adopting a uniform for the first time.”